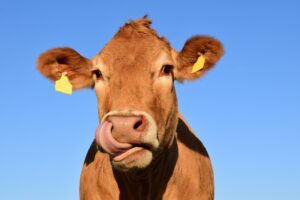 Automated technology aided by data collection, lasers, and sensors is cropping up all over the world on dairy farms. AMS (Automatic Milling Systems) have been developed to help dairy farmers reduce the amount of labour required for milk harvesting.

In robotic dairies, special emphasis is placed on comfortable stalls, effective foot bathing, and clean alley floors especially for lame cows that attend less and to prevent lameness. With variable milking intervals, several labour challenges are created for handling, sorting, foot bathing, and dealing with special needs cows. In order to address these challenges and to ensure that expected savings on labour are realised, appropriate separation and routing options are needed at milking stations.

Appropriate protocols for layouts and gating will ensure that all handling tasks can be completed by one herd worker alone. Where the number of cows is well below capacity and excellent management is applied, free guided and free traffic systems will yield similar results. In less than ideal circumstances, however, the use of commitment pens and guided traffic systems creates stress and long-standing times that particularly affect lower-ranking cows. Poor management and free traffic also create more fetching labour.

Automatic milking systems have gained widespread acceptance as a new way to reduce labour, increase production, and to improve the way dairy farmers milk between 40 and 250 cows, particularly in Western Europe. The growing popularity of the use of robotic milking technology is evident in the rapid rate of its adoption. The worldwide number of robotic dairy farms in 2009 was 8,000. According to Barkema et al. in just six years this number had increased to more than 25,000.

Two excellent reviews have been published summarising the effects that robotic milking had on the management, welfare, udder health, behaviour, and management of cows. However, more research is required on many aspects of robotic milking technology, particularly on the design and layout of robotic milking barns. Because field observations tend to be inconclusive, the practical experience gained from commercial robotic herds as set out in this report may be helpful in identifying research priorities.

In a study conducted on 107 robotic dairy farms in Denmark, Belgium, the Netherlands, and Germany, a 20% average reduction in labour was reported with large variations among the farms.

One of the demands on labour is the fetching of cows that do not voluntarily attend. Minimal effort is required to fetch one or two cows per robot and in milking barns with logical gating and routing, free stalls can be cleaned at the same time. In robotic milking, the measure of milking success is closely monitored by the owners as the average milking frequency of each cow. The typical average ranges between 2.2 and 3.2, however, since there is a wide range of results from individual cows, it cannot be compared with twice or three times fixed-interval milking.

Since 2010, quota policies have made it very difficult to expand operations on milking farms in eastern Canada which resulted in a lower number of cows per milking stall. With higher milking speeds cows will produce more milk per robot with the same occupation rate. According to a 2016 report, Tremblay et al. reported an average box time of 6.84 minutes per milking on 2.91 milkings per cow and 147 milkings per day or 50.5 cows per robot.

In the design of an AMS facility, the option of a guided or free traffic system is an important consideration as it will have a substantial effect on cow comfort and labour efficiency. As mentioned previously, a commitment pen comprises a gated area in front of or beside the milking robots that the cows cannot leave until the milking process has been completed. The commitment pen can be accessed via a preselection gate or a one-way gate. Reports from older studies on guided traffic indicate fewer visits to the manger but more frequent milking and less resting time. Stress responses (measured by blood cortisol levels and heart rates) and kicking and stepping away during milking have all been thoroughly studied and reviewed. In a comparative study of free traffic vs milk-first guided systems, a partial-mixed ration plus up to 3 kilograms of concentrate was fed to cows in a VMS milking stall.